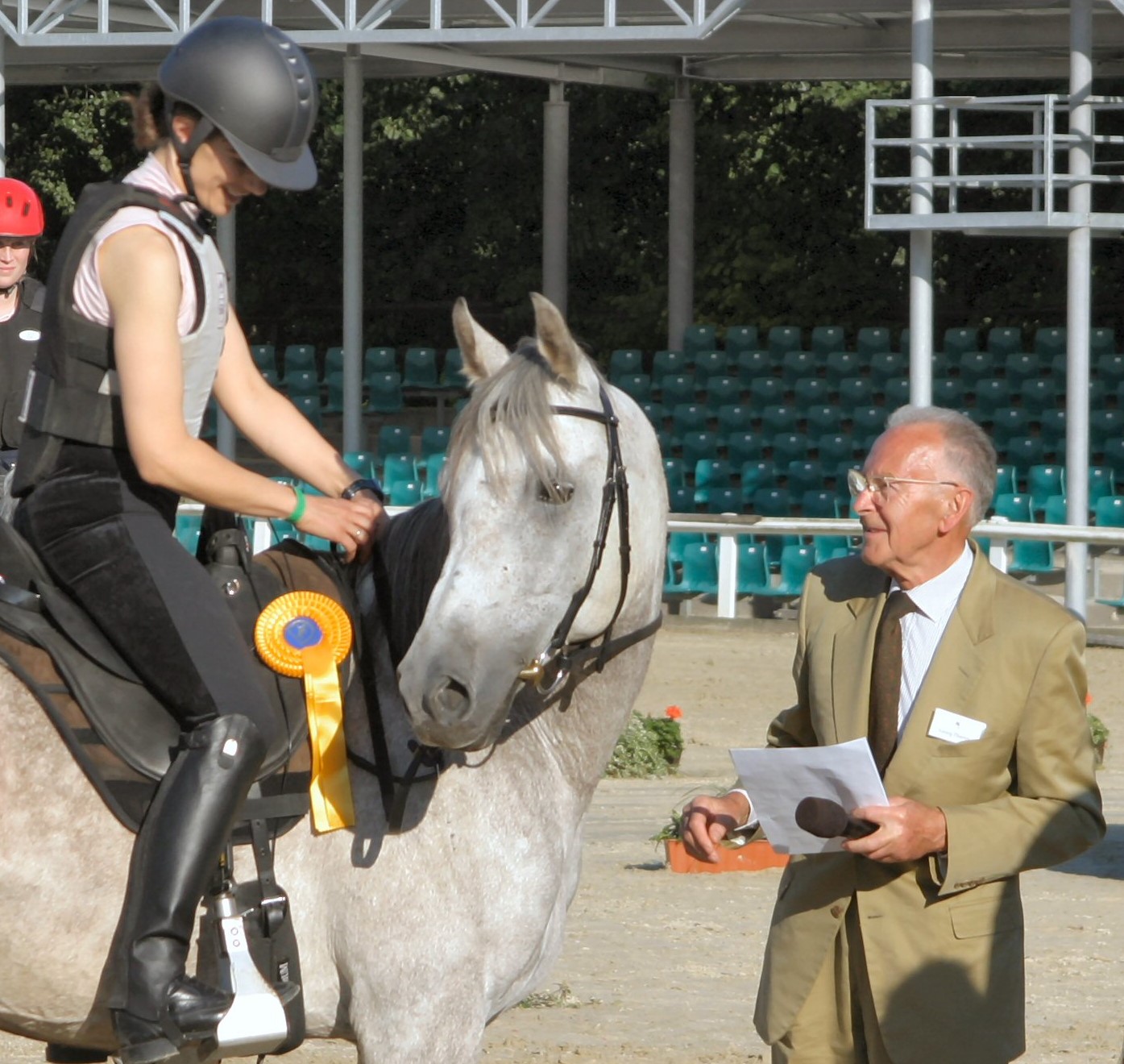 On the death of Georg Thierer

A fine man has passed away ... 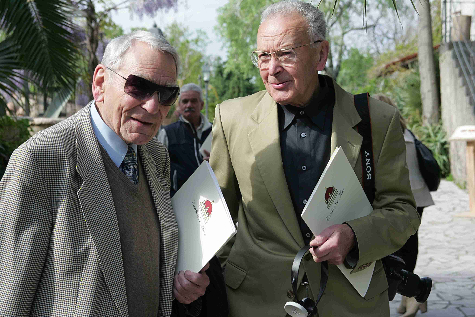 We mourn the loss of a faithful comrade-in-arms and a good friend!

Annual General Meeting 2021 at the State Stud of Marbach

At the invitation of Landoberstallmeister Dr. Astrid von Velsen-Zerweck, approximately 40 members met at HAUPT- und LANDGESTÜT MARBACH on September 4, 2021, for this year's Annual General Meeting.
The attractive program began with a reception at the Information Center and a one-hour tour of the stud. Afterwards, we were treated to coffee and homemade cake in the Stud's Inn.

The formalities were quickly completed, thanks also to the fact that not too much had happened in the Corona year 2020/21. The Chairman then gave a short presentation on the current developments in the international Asil Arabian breeding scene, noting that a new initiative for the preservation of the Asil horse of the Bedouin is establishing with definition and principles that Asil Club, Al Khamsa and other Preservation Groups have successfully represented for over 50 years in the interest of all Asil Arabian breeders worldwide, also in association with WAHO. The attempt to install a new, allegedly purely "Arab", group with almost identical statutes as the only true authority to be followed from now on, and which would make the established organizations superfluous, was unacceptable in view of the decades of commitment and success of international Preservation Groups, so the Chairman. The members agreed that there was no need for another organization. The Asil Club as well as Al Khamsa, Pyramid Society etc. have made a significant contribution to preserving the cultural heritage of the Bedouins when their descendants were extremely challenged by the drastic economic turnaround, forgetting the customs and cultural heritage that had been handed down.
Often, in conversations with Arab personalities, such as by HM King Abdullah bin Abdulaziz at a banquet with German Chancellor Gerhard Schröder, it was said: "Dr. Olms, you are more an Arab than an Arab."

One of the mares quarters with adjoining pasture. Photo D. Merzbach

Der Chairman reports on the past year. Photo D. Olms

The Chairman says thank you in the name of the members for the invitation to Marbach and the speech. Photo J. Merzbach

Presentation of the Stud Horses

The presentation of the stud horses on Sunday morning had a special highlight to offer. The Marbach State Stud looks back on more than 200 years of breeding purebred Arabians and today, in addition to breeding Warmbloods, purebred Arabians and Southern German Coldbloods, is dedicated to preserving the asile Arabian blood lines of the Royal Württemberg Stud Weil, with the breeding objectives of rideability, character, willingness to perform, and performance ability. To promote these qualities, the stud received a group of asile horses directly from Egypt at the beginning of this year to refresh their bloodlines. Five stallions and four mares originating from partly rare dam lines (strains) now enrich the Marbach herd. The stallions, some of which are still in full development, were presented individually in the arena and received excellent expert commentary from the director of the Stud. Dr. Astrid von Velsen-Zerweck.

The presentation of the stallions: in the covered arena: Nasheed Al Amal bred by Philippe Paraskevas, Egypt. Foto O. Seitz

The Marbach mares were shown with their outstanding offspring in perfect weather in the pasture adjoining their stables. They impressively document the breeding strategy of the stud. Unfortunately, the four new Asil-Egyptian mares could not be shown running free because of the advanced time. All in all, the members have seen very well-mannered, well-built, calm, performance-ready Asiles, which will certainly bring the breeding forward with regard to the goal. We thank all the staff who looked after us so lovingly.

one of the many asil mares who were presented with their progeny in the pasture next to the mares quarters: Mardshana with her 2021 colt by Naoufil. Foto O. Seitz

Silvia Naumann expresses another thank you in the name of the Board for a most competent presentation and commentary of the stud's horses and two wonderful days. Photo D. Merzbach

Due to the pandemic, the Asil Cup International had to be postponed for another time. Subject to the support of a sponsor, the Cup 2022 is to be held at Bückeburg Castle. If this does not work out, the next annual general meeting will be held there at the beginning of September 2022. Ideas for the program are welcome. 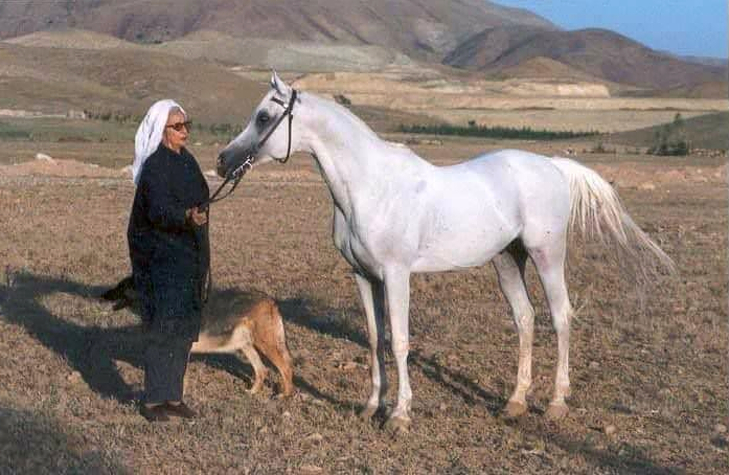 Approximately 300 horses of Straight-Irani Asil Arabians (Khuzestan Asils) have been confirmed as "asil" according to the Asil Club definition and will thus be included in the Club's conservation efforts. 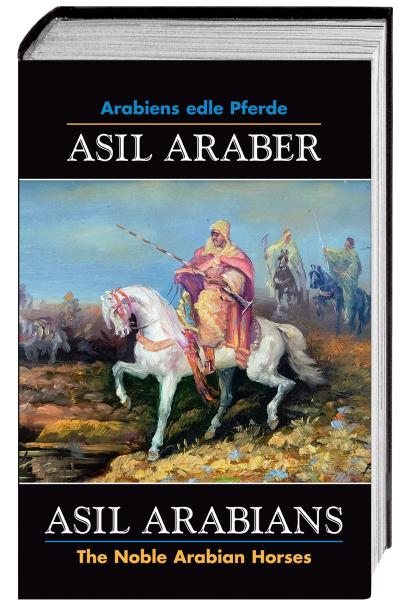