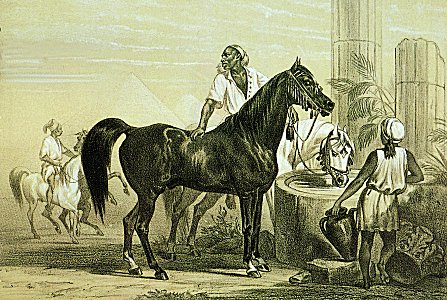 This evening Kjerwan-Bashi told me an anecdote which is characteristic of an Arabian; I had heard it before at Orfa.

A Turkish general of the cavalry, Dano-Pasha at Mardin, had long been carrying on negotiations with an Arabian tribe on behalf of a fine mare of the Meneghi breed; finally a price of 60 bags, equivalent to 30 000 piasters, was agreed upon. At the fixed hour the chief of the tribe arrived at the Pasha’s courtyard with his mare. The Pasha tried to haggle again, but the sheikh proudly replied that he would not reduce the price by one single para. Morosely the Turk flung the sum to him remarking that 30 000 piasters for a horse was a price unheard of. The Arabian looked at him in silence and quietly tied the money into his white coat. Then he climbed down into the courtyard to say goodbye to his mare: he talked to her in Arabic, stroked her forehead and her eyes, examined her hooves, and while the animal stood attentively, he went round her slowly and inquiringly. Suddenly he jumped onto her bare back and the mare instantly shot forward and out of the courtyard.

As a rule the horses here always stand with the palan or felt saddle on their backs. Every noble man has at least one or two horses ready in his stable so that they only have to be bridled to be ridden. The Arabians, however, need no bridle at all; the halter rope is enough to stop the horse, a slight touch of the flat hand at the right or left side of the necks shows the horse in which direction to go. So within a few moments the Agas of the Pasha were in the saddle and went in pursuit of the fugitive.

The bare hoof of the Arabian mare had never touched a stone pavement so she rushed down the steep and rough path from the castle with some caution. The Turks on the other hand gallop down a precipitous slope full of sharp rock as we would gallop up a sand dune. The thin annular shoes, being forged cold, protect the hooves against any injury, and being used to such rides, the horses never make a false step. Where the grounds end, the agas had almost reached the sheikh, but when they were on the flat, the Arabian being in his element, races off straight as here there were neither ditches nor hedges, neither rivers nor hills to hinder his pace. Like a trained jockey who is in the lead of a race, the sheikh tries to ride not as fast, but as slowly as possible. Looking at his pursuers in regular intervals he keeps at shooting distance of them; he goes faster when they come nearer; he slows down when they fall back; he walks when they stop. In this way the chase goes on until the glowing disc of the sun sinks towards the evening, and only then he asks for all the strength of his mare. Leaning far forward he pushes his heels into the sides of the animal and with a loud “Jallah!” he darts along. The strong hooves thunder on the solid ground, and soon nothing but a cloud of dust shows the pursuers the direction in which the Arabian fled.

Dusk is very short here, where the disc of the sun sinks almost vertically, to the horizon so that the night soon covers any trace of the fugitive. The Turks, without food for themselves or water for their horses, find themselves twelve to fifteen hours away from home in a totally unknown region. They have no choice but to turn back and to convey the unwelcome message to their master, that horse and rider and money were lost. In the evening of the third day they reach Mardin, half dead of exhaustion and hunger, the horses can hardly move at all. What remains is the sad comfort of scolding at this new example of Arabian perfidy while they cannot but do justice to the mount of the traitor and recognize that such an animal is not easily overpaid for.

The next morning when the Imam called for the early prayer, the Pasha heard hooves clattering beneath his windows; it was the sheikh who quite innocently rode into the courtyard. “Sidi!” he called out: “Sir! Do you want your money or my horse?”