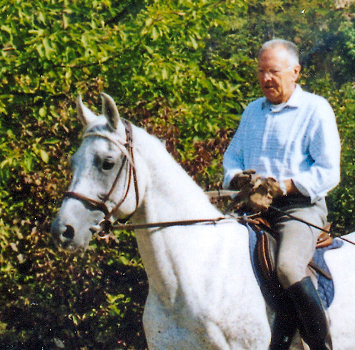 On October 26, 2021 our vice chairman Georg Thierer died after a short serious illness. The Asil Club has lost a comrade-in-arms of the first hour and a co-founder, the Olms family has lost a long-time dear friend.

With his wife Ute he founded the internationally renowned stud Moneera Thierer Arabians. With skill and knowledge they bred over 100 foals and played a major role in shaping the breeding history of the Asil Arabian in Europe. The two sons, Frank and Jörg, were also active in the saddle, and the family spent many Sundays riding out in the surroundings of the stud, rode autumn hunts, and Georg Thierer successfully competed in short to medium endurance rides with the self-bred and -trained stallion Moneera Seneb.

"Arabitis" started for the Thierers with Arabians from Marbach State Stud as well as through the friendship with Countess Gitta von Walterskirchen with her chestnut Arabian stallion Borkan from the Egyptian state stud El Zahraa. The Thierers were enthusiastic about the character of the asile stallion. After they had experienced Hadban Enzahi in Marbach, they soon traveled to El Zahraa themselves. There they acquired the first mares for their stud in 1972, which arrived in Bad Schönborn after a long odyssey and laid the foundation for a successful breeding program. Among them was the dark chestnut mare Moneera (*1968, Alaa El Din - Mouna) from the Moniet El Nefous line, after which they named their stud.

As enthusiastic riders, good training under saddle was very important to both of them. That's why the Thierers were keen to have a stallion, Moneera Siptah, trained in dressage up to high school lessons, initially by the Neindorff student Dorothee Baumann-Pellny (then Faltejsek). Later they placed him at the disposal of Corinna Lehmann for further presentation under saddle, in whose stable he remained until his death.

Another, Moneera Seneb, was trained for endurance and competed successfully under Ina Baader and under his breeder and owner. Even at the age of 74, Georg Thierer did not miss the opportunity to ride his stallion himself on 40 to 80 km rides. The participation of his horses in the Asil Cups was a matter of honor for him. In 1993 Shareef (Kaisoon - Salha) won the Asil Cup endurance ride over 60 km, in 1993 Moneera won the Nobility of the Desert class. In 1997 and 2000 Moneera Seneb won the endurance ride over 40 km. And in 2003 together with Allat Al Amica and Allat Al Alysha he achieved the first place over the 42 km distance. Moneera Siptah regularly excelled in the show program in dressage lessons up to high school. Still in 2014, Georg Thierer had two mares from his stud trained and compete in the endurance rides and in the dressage classes of the HH Sheikh Mansour Bin Zayed Asil Cup 2014 in Castell.

The Arabian scene in Germany and the Asil Club have lost a shining example in Georg Thierer, who was always committed to the use of Asil Arabians under saddle and to the preservation of the Asil Arabian as a riding, sport and family horse. Whenever company and family allowed, he was also present at the WAHO meetings, sought discussions with like-minded people, actively participated in the organization and execution of the Asil Club endurance rides and the Asil Cup International events. As second chairman of the club, he was never absent from our annual general meetings.

Georg Thierer was not only a highly competent breeder and active rider, he was a friend to many. He will be greatly missed. OUr deepest sympathy is with his family and we wish them strength for the difficult time to come.

The board of the Asil Club e.V.