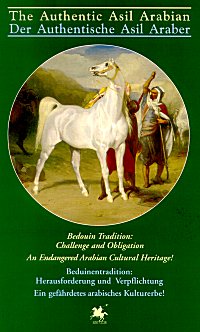 Besides the English Thoroughbred, the Lipizzaner, Hanoverian, Trakehner, all warmblood breeds, even light draft horses, the Spanish horse, Anglo-Arabian and many more would have been inconceivable in today’s form without the influxnce of original Arabain blood.

It is an urgent concern to preserve the Asil Arabians for posterity. But it is at least of equal importance that these Asil Arabians are again to be found in their region of origin, on the Arabian Peninsula, in adequate quantity and quality, but to be precise, the authentic Asil Arabians; not those horses that, despite a proven proportion of foreign blood in their pedigrees, are accepted as pure-bred Arabs by WAHO and her national breed associations, which  and by no means can be considered “Asil”.

In the Arabian desert, the Bedouins have created the most noble and hardy creature, the Asil Arabian horse. In the past centuries, the buying expeditions of Europeans and Egyptians repeatedly resulted in stallions and mares of utmost nobility being taken to other countries, thus reducing the stock in the original habitat; the number of authentic asil Arabians was tragically also reduced by the raids of the Egyptian pashas and their passion for collecting the purest and noblest desert steeds.

The war mare has long disappeared from the life of the Bedouins, and the classical type of the Asil Arabian is rare now. The asil horses to be found in the original habitat today certainly have a high quality and capacity for athletic performance, but their type – not considered that of the re-imports to the original habitat – rarely meets the taste and fashion created by modern international Arabian horse breeding and is likely not to arouse the interest of breeders from other countries seeking to improve their breeding programs.

Nevertheless, the descendants of the Bedouins have rediscovered the asil desert horses as their “national heritage” (Schraps). They know what treasures they have lost, and they know that the outstanding nobility of the authentic Asil Arabian was their own breeding accomplishment (see “Identity of Type in Old and New Illustrations”, Asil Arabians, The noble Arabian Horses, Vol. IV, p. 279)

However, the matter in hand is not the museum-like preservation of a great cultural asset or the satisfaction of seeing noble Asil Arabian horses in their original environment again, it is primarily, that the breeders of pure breeds – as animal breeding science shows – constantly require animals from the area of origin, after three to five generations at the latest. For the breeding of Asil Arabians, we need original Arabians of the classical type. A few 20th-century authors reject this opinion in the question of the impact of the "home soil" (for example G. Rau and O. Saenger); however, this is contradicted by the majority of statements made by other hippologists and, finally, by the experience of numerous breeders.

H. Seydel tells us the following:

“For this, the purely oriental breeds (in Europe) have been the object of examination, as they display the influence of the home soil with the most clarity, and it must be quite clear to the European breeders that, in crossing different breeds, they can only get as much out of the genotype of the Arabian as is still in evidence on European soil. We can confirm here that none of these breeds have been able to do without the constant importation of the original animals. Thus we can see that, when environmental conditions change, the outer type cannot be preserved completely and permanently.

Changes in type … usually only become obvious from the 4th generation onwards. In addition to the increase in size already mentioned, the changes are as follows: The typical characteristics of the head disappear, the horizontal croup silhouette and the bearing of the tail are no longer as pronounced, the “dryness” and the characteristic metallic sheen of the hair suffer changes … The type cannot be preserved permanently without constant importation of original animals” (Das arabische Vollblut, 1932).

“These differences in type were reported by Abbas Pasha as being true for the Egyptian breeding of Arabians. Robert Mauvy, who has had 60 years of breeding experience, describes the influence of French soil on the Arabian breed and comes to the conclusion that this breed has proved to be extremely bound to the soil. Dr. Houtappel also claims that 40 years of breeding experience have convinced him that, in Holland, Arabians cannot be bred for more than three generations without ‘cows’ being the result. I could also report how, in modern populational genetics, the degree to which breeds are bound to their home soil is of central importance, and that each change in the environment immediately causes a change in the organism, whether a very small change or a larger one. Animal and environment are one” (1976).

“Animal breeding is not a sterile mathematical science. The hereditary factors of animals are of the utmost complexity. Even when the factors are identical, each interaction with its environment makes something different of the genes available. The Arabian desert was, and still is, a completely different biotope, i. e. with different climatic conditions. In former times, the high demands of the breeders were added to this” (1991).

The revival of a great tradition will hopefully soon allow an old dream to come true. A start has been made through the import of horses of unquestionable pedigrees, of the finest Asil Arabian blood lines, with magnificent conformation, from the land of its ancestors.

The Asil Club is prepared to check lines of descent in order to avoid further disappointments through the acquisition of pure-bred Arabians with foreign blood in their linages.

The unique qualities Asil Arabian horses are held in high regard for are:

Asil Arabians give evidence of these qualities in all equestrian disciplines: