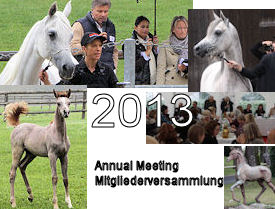 On September 14, 2013, the annual meeting of Asil Club members and guests took place at Michael Ponnath’s stud farm. After the board meeting, some 100 members were treated to a lovely presentation of most of the farm’s horses.

A beautifully produced illustrated brochure provided information on pedigrees and foundation horses. The horses were presented one by one, with a knowledgeable commentary by Michael Ponnath and Dr. Astrid von Velsen-Zerweck, director of Marbach State Stud and member of the board.

The first horses shown were the two young stallions Malik Halim and Mashour Halim. Both were shown in hand. Both stallions are overall very classic and typey. Besides beautiful heads with large eyes, they also show a balanced structure. They have substance, good bone, and convincing riding horse points.

Following the stallions, the mares were shown in the open arena in three family groups. First in was the Dahmah Shahwaniyah group with foundation mares and their offspring, followed by the Saqlawiah-Jidraniyah herd, of which there are two mare families (Bint Moufisa, Moufisa Al Kidir) at the stud. The mares were led around the arena, allowing them to demonstrate their excellent walk, after which some of them were turned loose. The very typey, classically beautiful mares again showed substance, good and active hindquarters, and very good riding horse points. Unfortunately, due to the extremely wet ground, they were barely able to show the true quality of their movements, but in-hand, the mares showed the tendency towards a ground-covering, springy trot. The continuous drizzle prevented the mares from demonstrating their full potential. At the end of the parade, some 2013 foals were shown one by one, each with its dam, free in the paddock. They included the first foals of the two young stallions Malik Halim and Mashour Halim. Their foals were extremely promising; a very charming group of uniformly high quality.

The actual meeting followed after a coffee break. The chairmen gave a brief survey of the year that had passed since the last meeting. Special attention was given to the progress of the planning for the next Asil Cup International 2014 . This event should place the emphasis on performance, as we need to convince the potential patron, a son of the late Sheikh Zayed, that our asil horses, the asil Egyptians in particular, are not only beautiful, but capable and willing riding horses that excel under saddle, whether they are Old or New Egyptians or asil-Arabian. It has not yet been possible to decide on the venue; one possibility under discussion is the Fürstlich Castell’sche Domäne. The well-established Asil Club Marbach Endurance Ride under the patronage of H.H. Sheikha Lulua Al Sabah was well supported and the number of entries is rising again.

Following the report, there were two very interesting talks, followed by a Q&A with the speakers.

In his talk Developing the Safe Haven Concept for the True Arabian Horse, Philippe Paraskevas described his ideas for improving the breeding of asil-Egyptian horses and emphasized that the asil bedouin horse should once again become what it used to be: in particular, a versatile, athletic, fearless riding horse with good riding qualities and an outstanding disposition. This should also be reflected in the judging at shows and in the selection of breeding stock. Athletic ability and riding qualities should be firmly fixed genetically and combined with the beauty of the classic Arabian type. An "ideal" type dictated by the demands of the market would only lead to the destruction of the authentic Arabian horse of the desert. If measured by this "ideal phenotype" which is the requirement for success today, even great historic sires such as Seef, Sameh, or Nazeer would not stand a chance, as the author shows eloquently in his books The Egyptian Alternative Vol. I and Vol. 2.

In Germany, these arguments have led to controversial discussions, as they argue against breeding for beauty and for a fashionable type; on the other hand, Philippe Paraskevas‘ opinions have already found many supporters, and a change of direction appears necessary to many.

The second talk, The Significance and Future of the Babson Arabian horse bloodlines in Asil Arabian horse Breeding was held by Anita Enander, co-founder and for many years chairman of the Institute for the Desert Arabian Horse, and at present Chief Executive of Arabian Horse World magazine.

In her talk, which should also provide food for thought, she lamented the disappearance of Babson blood from the pedigrees of modern Straight Egyptians. She especially emphasized the three special advantages of the asil Babson horses: "Temperament, temperament, and again, temperament" as well as the athletic potential of these bloodlines, which found their way into many leading breeding programmes throughout the world between 1960 and 1990. Anita Enander appealed to all breeders to make use of this gene pool which combines riding qualities, willingness to perform, and authentic Arabian type, and to prevent it from being lost. The book The Babson Influence, published by the Institute for the Desert Arabian Horse, gives an overview of the history and the worldwide influence of the Babson Arabians. It is available from Olms Publishing. Both speakers signed their books after the Event.

In the late evening, the eventful day ended with an informal get-together and a good meal. The Ponnath family treated the guests to fresh salads and a delicious barbecue.

Many thanks to our host Michael Ponnath and his busy helpers!