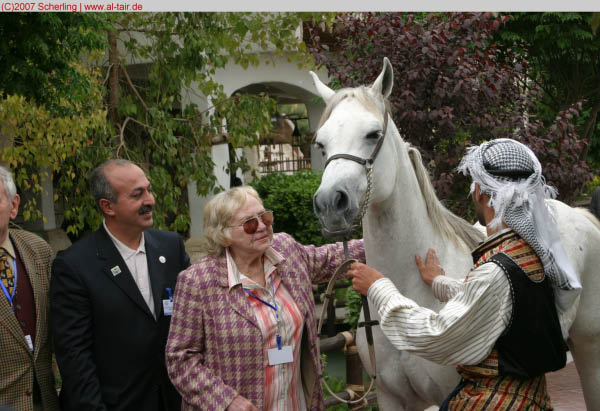 On January 14, 2018, Hanna Louise (Hansi) Heck-Melnyk, our esteemed member of the Board, sadly passed away at her home, her beloved Serenity Arabian Farm, in Hawthorne, Florida.
Hansi has been one of the fiercest advocates for the Asil Arabian horse. In the saddle from the age of 4, she learned from some of the best Master Dressage instructors gaining first-hand knowledge through a lifetime as a horsewoman, Grand Prix dressage and jumping equestrian trainer and teacher. Hansi was an accomplished breeder, trainer, and competitor with warmbloods, but always her first love had been the Asil Arabian horse.
In 1967 her dream of owning purebred Arabian horses was finally realized when extraordinary circumstance took her to Texas on a route that just happened to pass by Gleannloch Farms. There she saw the most beautiful young colt that she had ever seen. Driving up to the ranch house, Hansi met for the first time Doug Marshall who told her he could never part with *Khofo as he was the backup for his herdsire *Morafic. When she was shown *Morafic, Hansi could only stare at him with tears running down her face. She could not turn away from the 2-year-old *Khofo, and pleaded with Doug Marshall to let her buy him. She promised that if anything happened to *Morafic she would send *Khofo back to Gleannloch. Eventually, Doug Marshall saw her heart was lost to the colt and agreed to sell him to her. This was the beginning of a lifelong friendship between Hansi and the Marshalls.
Earlier in 1967, she had purchased a 165-year-old estate farm in Queensville, Ontario, Canada, and named it „Serenity“, because the peaceful, beautiful farm contained some 160 acres of excellent land and soil. With the discovery and purchase of *Khofo (Morafic x Nabilahh), Hansi made the switch from warmbloods to Asil Egyptian Arabians and never looked back.
She always said she could train five Asil Arabians in the time it took her to train one warmblood due to their exceptional intelligence, willingness, and the fact that they take care of their rider. „*Khofo was the best horse I ever knew, “said Hansi. „He produced 252 children, and over half of them became international champions.“

In 1968, Serenity became the only privately-owned quarantine for the USA and Canada. It was the point of entry for Egyptian horses imported over the next four years and saw the horses that formed the foundation of American Asil Egyptian breeding. Hansi personally cared for every horse that came through the quarantine and rode many of them to ensure they received enough exercise and were put in the best possible condition. Between 1968 and 1970 and with the assistance of Doug Marshall, Hansi imported several mares from El Zahraa. *Khofo was bred to these mares creating the next generation of multichampions in halter and performance. The progeny of her breeding program earned championships in Canada and the United States, the horses having been trained and shown mainly by Hansi herself. Serenity offspring became known as great performance horses. Current representative of her breeding program in Germany are for instance Serenity Habib, who served at State Stud Marbach for some time, as well as the endurance athlete Serenity Shaham, owned by our board member Silvia Naumann, as well as several Serenity offspring at El Ameen Stud of our members Lutz, Heike and Kirsten Petersen.
In 1973, Hansi imported another stallion from Egypt to breed to the daughters of *Khofo. The 19-year-old *SF Ibn Nazeer (1953), son of the legendary Nazeer out of the beautiful and well-bred Lateefa, sired 12 Asil Egyptian daughters and six Asil Egyptian colts for Serenity.
One of *Khofo's remarkable grandsons was SF Untouchable (1976). At age 4 months he stood about 14.3 and was already Junior Champion. He was severely injured as a yearling running through a farm gate that twisted all around him, cutting up both of his hocks. The vet was going to put him to sleep, but Hansi would not allow it and placed him in a paddock next to *Khofo. *Khofo watched over him like a hen. “Touch“ never did pick up in height because he was fed little to prevent laminitis during the time of his injury. When he was four years old, Hansi rode him and said of him: „He moves just like Sakr.“ According to Hansi he was child-safe, with a huge eye and he could really fly! So human was he, that he could even be brought into the house.
As an accomplished dressage rider, Hansi evaluated horses with an eye to athleticism based on correct conformation. She schooled many horses in the basics of dressage for the purpose of evaluating their suitability as breeding stock. No untested horse would ever enter her breeding stock.
In 1976, Hansi moved the herd to Florida and established what has been known as Serenity Arabian Farms until the early 2000s, a name recognized worldwide as a synonym for excellence. Her contributions to the Arabian horse world spring from a lifetime dedicated to the research, breeding, and preservation of the Asil Egyptian Arabian horse. Her philosophy led to the production of horses that are both beautiful and capable of great athletic feats. This philosophy Hansi also contributed and promoted as a Board member of our Asil Club e.V. where she provided countless researches and efforts to resolve questions of descent of our Asil Arabains. She attended the Asil Cup International events several times, last in 2000, as well as many of our annual general meetings.
In addition to her extensive breeding program, Hansi invited students to learn everything about horses „from the womb to the tomb“. She gave many lessons to beginners free of charge to educate them with Arabian horses and seminars on Arabian horses around the world encouraging others and teaching them to understand the sensitivity of the Asil Egyptian Arabians.
From a very early age, Hansi’s love for Arabian horses led her into the addictive world of research. Her library preserved irreplaceable documents and facts gathered in personal trips and interviews to every country she could visit in her tireless search for information about the origins of every Asil Egyptian horse she could find. Wherever she could track down a bloodline or find another source, she spared no expense in authenticating and documenting her research. Among others, it was her merit that El Deree’s lineage has been confirmed to be Syrian asil by the head of the Al Jibur tribe in Syria, Abdel Aziz Al Meslat, on occasion of the WAHO Conference in 2007 in Damascus.
Hansi knew that the data she was discovering was priceless and had to be shared with others. So she published some 24 books, including her most important work, the Straight Egyptian Index, in which she lists Asil Egyptians and their ancestors from day one until 1993, including their progeny. Another one of her books, the Partbred Index, outlines in detail horses with questionable pedigrees and/or insufficient available data (needed to clearly define their status as Asil Egyptian).
Hansi never quit verifying facts and welcomed all new information and corrections. She was known around the world as one of the foremost pedigree experts of Asil Arabian horses as well as other bloodlines. She devoted her life to preserving Asil Arabian horses and helping others to do the same.
She has done more than document history – she has become a part of it.